This is the Sandbox

What is the point of producing artwork in the present moment, or any moment? Western art history describes an evolution from illustrating the sacred, whatever that may have been believed to be at various points in time, to the present, where some individuals maintain that there can be art without content, purpose or meaning.

I want to explain what I think I am doing as an artist and why.

Modernism is supposed to have ended sometime in the 1960s. Much that has been written about this alleged transformation is confused, if not nonsensical, and, in any event, is unhelpful to the  artist trying to situate himself or herself in the 21st century. A useful exception is the work of Hans Belting, particularly The Invisible Masterpiece, and Art History After Modernism.

In Invisible Masterpiece, Belting chronicles the history of the idea of the masterpiece and how its significance changed in the Renaissance as the role of art changed from religious explanation to individual expression. Belting describes the diminution of the importance of the individual artwork to the point where it is claimed by some that a work itself is unnecessary.

He describes the theft of the Mona Lisa in 1913, and how the theft contributed to the commodification of this painting. The process  continued through Duchamp’s moustache and goatee representation of the painting and his subsequent involvement in diminishing the importance of the work of art. Belting describes how such alienation of artworks is tied in with conceptual art and other manifestations of post-Modernism.

At the end of his life Duchamp reversed himself and asserted the primacy of tangible works of art by leaving detailed instructions for the posthumous completion  of an installation - Étant donnés (Invisible Masterpiece, 329-32) The link is to the Philadelphia Museum's page on Étant donnés.

Experiment freely
(no one is looking) 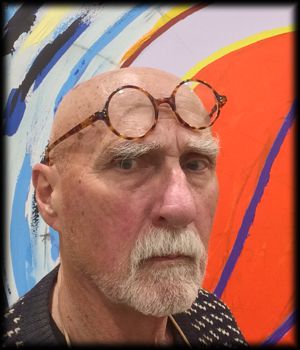 As Susan Buck-Morss puts it with respect to the work of Walter Benjamin:

The Passagen-Werk suggests that it makes no sense to divide the era of capitalism into formalist “modernism,” and historically eclectic “post-modernism,” as these tendencies have been there from the start of industrial culture. The paradoxical dynamics of novelty and repetition simply repeat themselves anew.

Modernism and post-modernism are not chronological eras, but political positions in the century-long struggle between art and technology. If modernism expresses utopian longing by anticipating the recognition of social function and aesthetic form, post-modernism acknowledges their nonidentity and keeps fantasy alive. Each position thus represents a partial truth; each will recur anew,” so long as the contradictions of commodity society are not overcome.

The assertion of the elimination of the work, let alone the masterpiece, as a necessary outcome of the process of making art, does not convince me that the physical work of art can or should be dispensed with.

Add a discussion of AGENCY in the context of  Gesamtkunstwerk, Wagner and current (2019) ring cycle with electronic /LED and other effects, several stage managers, etc.

The work has had its range expanded. Alfred Leslie’s move to, if not invention of, hyperrealism in the 1960s might be considered reactionary, especially when considered in the context of the subsequent trajectory of realism, at least in North America. It was, in fact, confrontational, as he stated at the time.

He has produced a large oeuvre on several themes, at a grand scale and in a variety of mediums (several series of large paintings), films, watercolors, and--for the last twenty years--large digital paintings that he refers to as “Pixel Scores.”

The artist’s career encompasses the art world from the end of World War II to the present moment. It supports my understanding that this period of time should be viewed as a continuum, not a series of stages as it has been fashionable for the art press to assert.

A work of any kind is currently considered acceptable, from painstakingly executed technically demanding pieces to ephemeral actions requiring neither manifestation of technical competence nor creative risk.

The issue really isn’t a particular work itself, but rather the context within which it is produced.

A metaphysical, let alone divine, source for subject or content is not susceptible to rational discussion.

The Brechtian argument for socially useful work falls short as it denies the autonomy of the individual. 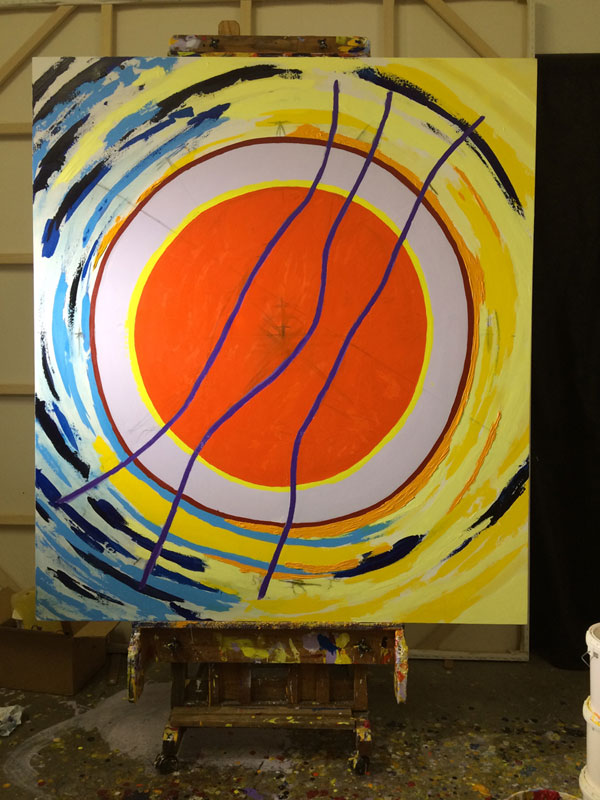 I first observed madrone trees when I came to Northern California in the fall of 1963. The forms and colors of madrone have an enduring aesthetic  appeal to me. The red circle painting above incorporates a motif, which I frequently employ, based on madrone branches. 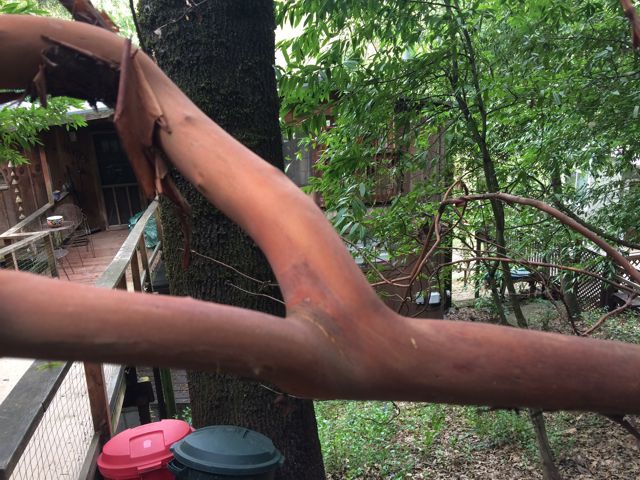 (1) I understand an artwork to be the product of an autonomous artist, not beholden to theocracy, the bourgeois market place, a need to be socially useful, nor even the desire to resolve dialectic tensions.

(2) An artwork is the product of the autonomous artist, not beholden to theocracy, the bourgeois market place, a need to be socially useful, nor even to resolve dialectic tensions.

To this I add my own compulsion to produce tangible works of art, which I consider products of innate talent, informed by study and practice, and refracted through an intensely militant individuality.

This is some code

Modernism still evokes irrational passionate opposition that has little to do with the nature, let alone the merit, of the works in question.

Robert Adams in his 1981 book, Beauty in Photography: Essays in Defense of Traditional Values, referring to the sources of great artists (Cezanne, Delacroix, and Matisse, in this case), writes -- in remarkably Quranic language -- “each, great as he was, understood that creations out of nothing are possible only for God.” (my emphasis) (p. 88). “Art that mirrors the order in the Creation itself [has not been] the subject of the art of [the 20th] century.”(p. 30).

Adams appears ignorant of the history of 20th Century painting.

The quoted passage above jumped off the page when I read it. The ironic contrast between the Islamic view that depicting the human form is sinful, and Adams’s Christian assertion that representational art is necessarily grounded in an aesthetic appreciation of God’s creation, is striking.

Adams asserts, as does the Quran, “Creations out of nothing are possible only for God.” Adams goes on to denigrate modern artworks that “have interesting shapes, etc., and are of trifling interest.”

In Islam, the depiction of people, or of animals with breath and voice, is blasphemous. Abstract geometric patterns and elaborate calligraphy are preferred.

An elaborate system of geometrical abstraction forms the basis for non-objective art that is largely, if not entirely, foreign to Western art and the way westerners apprehend art.

How one looks at art is a function of how one sees. 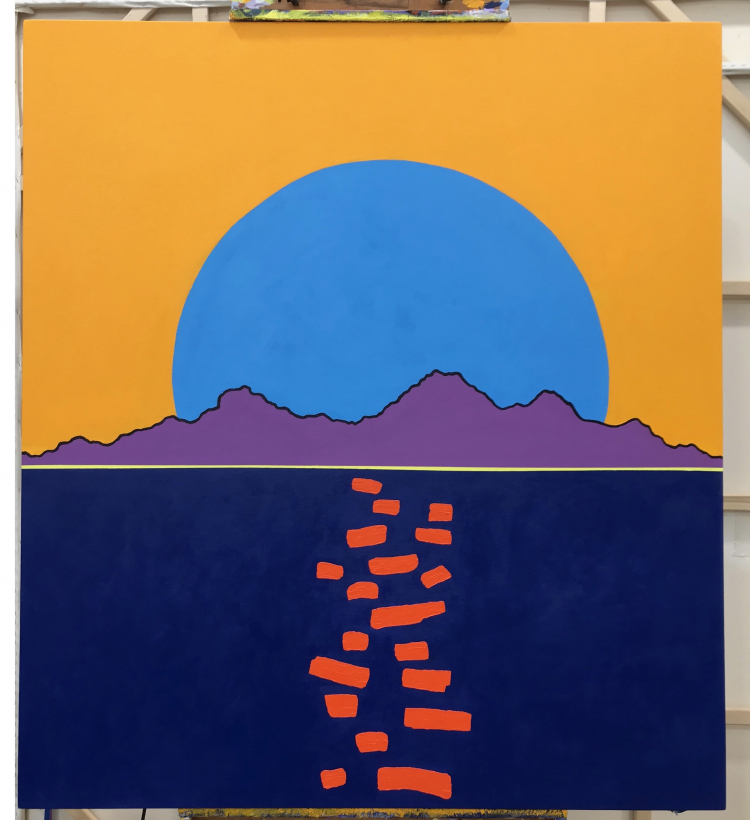